HISTORY OF KIFISSIA
(From the 3rd century AD until today)

Mentions of Kifissia exist since the 3rd century AD, in the battle referred to in the biography of historian Publius Herennius Dexippus, who led against a barbarian army, forcing them into a disorderly flight. 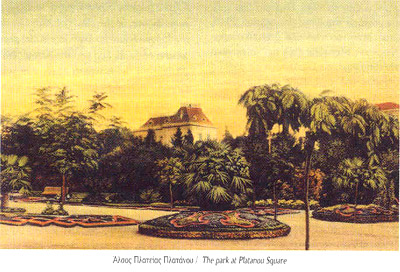 In the Byzantine times, Athens and its surroundings remained almost in the shade and were considered to be of secondary importance.

The Frankish rule (early 13th-mid-15th century) contributed to the decline and eventually the fall of the Byzantine Empire. The presence of the French, Catalans, Florentines and Venetians in Attica lasted for over two and a half centuries.

After the Fall of Constantinople (1453), the Turks conquered what was left of the pillaged Byzantine Empire.

In 1458, Muhammad visited Athens to admire its treasures, and it is rumored that the most important Athenian, the abbot of the Kaisariani monastery, handed him the keys to the city.

Muhammad was conciliatory with the Athenians and offered administrative privileges and tax exemptions. In 1460, Muhammad was informed that some Athenians were conspiring in order to throw off the Turkish yoke and took prisoners ten ealdormen as retaliation.

The Turkish explorer Evliya Çelebi (1611-1681), one of the greatest explorers-writers of his time, described Kifissia as a small town in a fertile plain with gorgeous houses, whose half inhabitants are Muslims and half Greeks. He did not fail to mention the white cherries of Kifissia, as well as the fact that the area of Kifissia is full of olives and small chapels.

During the Ottoman occupation, there were cases of Turkish tyrants commanders in the area of Athens. One such was the notorious Hatzalis (Hatzi Ali), whose actions are described by Panagis Skouzes in the book “A Chronicle of Enslaved Athens” (1841).

During the national revolution, many fighters fought the Turkish conqueror in Athens. Athanasios Viltaniotis, who lost his life in 1827 at the siege of the Athens Fortress, as well as Alexandros Kallipetis and Georgios Kourtis, were some of them.

After the Greeks’ struggle against the Turkish conquerors and their departure from Attica, the estates came summarily to the hands of the Greeks.

Over the years, significant figures settled in Kifissia, such as the Duchess of Plaisance, Mavromichalis and Botsaris, King Othon and others.

In 1841, the famous author Hans Christian Andersen (1805-1875) visited Kifissia and described it in his book “A Journey to Greece, Turkey and Up the Danube”, having been impressed by a plane tree whose branches spread out almost to the entire square of the village.

In 1870, the first statute of the Kifissia community was drafted, aiming at strengthening and improving the autonomy of the local economy. One factor that played a decisive role in the development of the area was its rail link with Athens in 1882.

The access to the northern suburbs became easier and Kifissia slowly began to be established as a holiday and entertainment destination for Athenians. At about that time, the first hotels appeared.

The population of Kifissia gradually began to grow. In 1880 Kifissia had a population of 700 residents, while around 1900 they surpassed 1,500. Various expatriates from Chios, Egypt and Constantinople came to settle in the beautiful suburb.

During World War I, but also after the Asia Minor Catastrophe, Kifissia hosted a large number of refugees.

On February 16, 1925, Kifissia was detached from the Municipality of Athens (to which it belonged until then) and became a community.

At this time, two major foundations were founded by the great national benefactor Emmanouil Benakis: the Benaki Children’s Asylum of Kifissia and the Benaki Phytopathological Institute.

In 1934, the Kifissia Flower Show was launched. Since 1937, these shows have been official in nature and have been annually organized by the Tourism Committee in Kifissia’s grove.

The dark days of the war and of the occupation soon arrived. Thus, of course, the Flower Show gates were hermetically sealed. In 1956, the post-war Local Tourism Committee of Kifissia once again opened the gates of the Flower Show to the public.

Kifissia became a municipality in 1942.  The region began to experience intense building and turned into a city bustling with business and professional activities of all kinds, but also with intense social, intellectual and athletic events. In addition to the coexistence of notable museums, exhibitions, libraries, institutions and collections, today there are more than seventy (!) cultural and sports clubs in Kifissia, a number which is indicative of its residents’ interest in culture, social activities and sports.

Mayors of Kifissia who performed their duties after the fall of the military junta of (1967–74):

In the summer of 1984, the Town Hall of Kifissia was housed in the building where it is today, a modern building, the creation of the architect Alexandros Tombazis and the donation of Hephaestion Papadopoulos.

Many famous politicians of modern Greece, as well as people of letters, lived or spent much of their lives in Kifissia.

For the writing of this article, in addition to the sources mentioned in the text and the information given to the author from the Municipality of Kifissia and various organizations, foundations etc., information was also obtained from the writings of Mrs Evangelia Valata Tsiama “The 75 Years of the Municipality of Kifissia”, which was published in June 2001 by the newspaper “Typos Kifissias” in the northern suburbs.

The Municipality of Kifissia
Alternative points of interest
Festivals and Events